Freemasonry is the world’s oldest largest Fraternity. Its history and tradition date to antiquity. Its singular purpose is to make good men better. Its bonds of friendship, compassion, and brotherly love have survived even the most divisive political, military, and religious conflicts through the centuries. Freemasonry is neither a forum nor a place for worship. Instead, it is a friend of all religions that are based on the belief in one God.

Many of our nation’s early patriots were Freemasons, as well as 13 signers of the Constitution and 14 Presidents of the United States including George Washington.

One of the fascinating aspects of Freemasonry has always been: how so many men from so many different walks of life can meet together in peace, never have any political or religious debates, always conduct their affairs in harmony and friendship, and call each other “Brother!”

WHAT FREEMASONS BELIEVE IN?

All Freemasons believe in one God and in respect for each other.

Freemasons are respectable citizens who are taught to conform to the moral laws of society and to abide by the laws of the government under which they live. They are men of charity and good works. They remain unchallenged as “the world’s greatest philanthropy!” 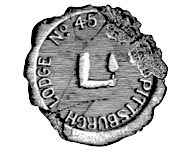